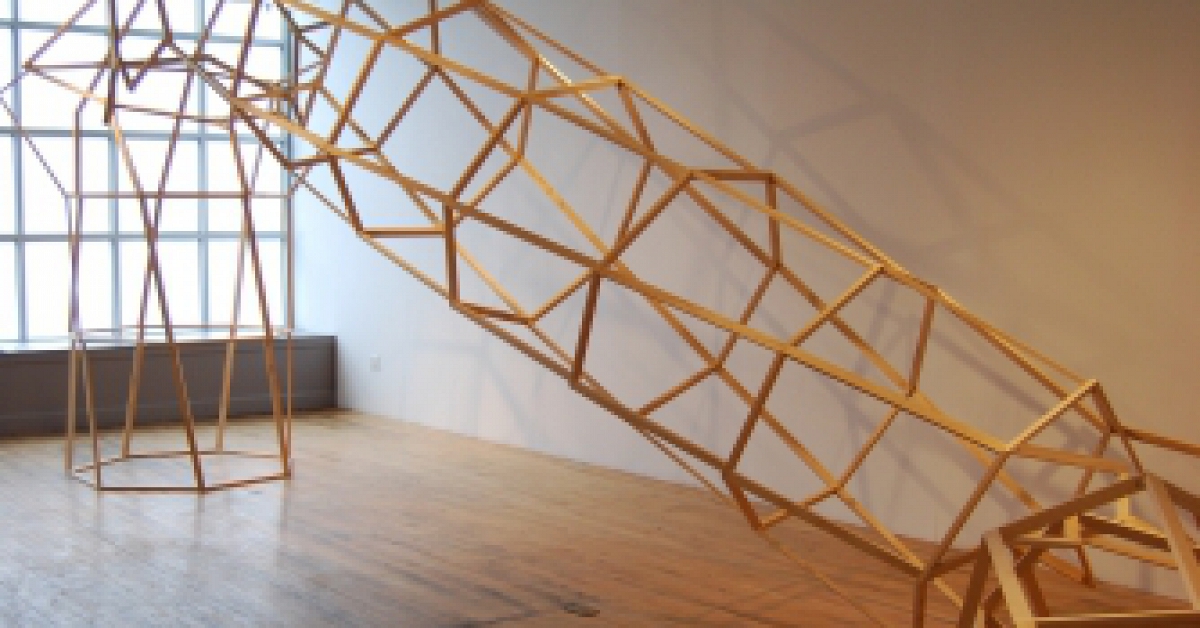 Chicago’s lakefront was almost home to the tallest building in the Western Hemisphere.
Dubbed “The Chicago Spire,” the design by famed architect Santiago Calatrava twisted upwards like a drill bit into the sky, but the massive project was killed in 2008, a casualty of economic recession. Now, Susan Giles harnesses the experimental form and symbolic weight of Calatrava’s Spire in an installation titled Crumpled Spire. Here, inside the gallery, just three miles west from the Spire’s proposed location, Calatrava’s would-be structure sprouts and collapses beneath the gallery’s twelve-foot ceiling. In Chicago, a city that stakes much of its cultural identity on skyscrapers, the Spire, though unbuilt, is already an icon. Giles’ sculpture serves as a monument to interrupted dreams.

Jeroen Nelemans renews the tradition of Dutch landscape painting through digital technologies. In a series of eight photographs presented on lightboxes, titled The more I see the less I grasp, Nelemans considers nature as a constructed fantasy. Here, nature is a stage set, complete with lighting effects and a structural framework. To create these layered images, Nelemans photographed each lightboxes’ innards, and using green-screen technology during post-production, he inserted photographs of sunlight streaming through a forest’s canopy. Finally, the commingled image of the lightboxes’ inner bulbs and the sunny forest are presented on the lightbox, illuminated from within. In this presentation, Nelemans reveals that a picturesque image, so often taken for granted as ‘natural,’ cannot be separated from the mechanism of its creation.

David Salkin is a visual artist and a designer of interior furnishings. Ultimately, both creative practices are informed by his training as an architect. Salkin draws upon the graphic and abstracted nature of maps, urban planning sketches, and architectural renderings, and he interprets them as flattened patterns to be inhabited by the eye. The patterns, created with Adobe Illustrator or watercolor pen on paper, range in visual experience from improvisational, fluid meanderings to the hardcore rigidity of modernist urban design. Salkin’s speculative urban developments are sited on a blank slate, devoid of the particularities of place and openly translatable across cultures and territories. Accordingly, Salkin warns that an appealingly designed map may not equate to a functional, happy habitat.