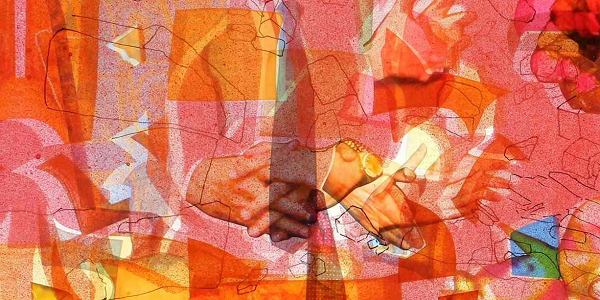 THE MISSION is proud to announce Structural Adjustment, an exhibition of recent acrylic block collages by Anna Elise Johnson. An opening reception will be held on Friday, March 11 from 6 to 8pm. The exhibition continues through Saturday, April 23, 2016. A Preview and Gallery Talk: Anna Elise Johnson in Conversation with Zachary Cahill will be held on Thursday, March 10 at 6:30pm.

Johnson collects official photographs taken during meetings between the leaders of the International Monetary Fund, World Bank, the U.S. State Department and various heads of state undergoing structural adjustment. These multinational partners provide loans contingent on economic policies — as part of structural adjustment programming — and are most often impossible for the borrowing country to repay, benefiting the leaders of transnational corporations and the global, capitalist empire led by the United States. Johnson’s acrylic sculptures structurally readjust the photographs that represent, support and solidify these imperial operations.

Johnson’s appropriated photographs tend toward a typical compositional structure picturing two politicians wearing suits and ties, sitting in cushy chairs with a table between, a carpet beneath, and markers of bourgeois stability and old wealth surrounding. Johnson layers the selected two-dimensional imagery onto acrylic sheets and attaches the layers with resin to create three-dimensional blocks. Symbolically her blocks exist as barricades that resist imposing power structures, while formally taking shape of large bricks, trapezoidal prisms and the negative space between two meeting politicians.

Taken together or commingled, hands have the power to bind; to form a contract. Handshakes “seal the deal.” World leaders shake on agreements and thus solidify countless abstractions that impact the lives of millions of people at a time. It is a performative gesture that enacts policy. It might be more accurate to say that the handshake ‘conceals the deal’ with the ritual spectacle of present-ness and embodiment that literally puts a “human touch” on the machinations of power. It is precisely these attributes of the hand and its relationship to power that philosopher Emmanuel Levinas was criticizing and by extension also taking a hammer to Nazi Philosopher Martin Heidegger’s theorizations of tools and things that are “ready-to-hand.”

ANNA ELISE JOHNSON (b. 1983) was born in Starnberg, Germany and currently resides in Los Angeles, California. Johnson received her BFA from Washington University (St. Louis, MO) and her MFA from the University of Chicago (Chicago, IL). Johnson was a Core Program Fellow at the Museum of Fine Arts, Houston from 2012 to 2014. She has recently exhibited solo exhibitions at GAR Gallery (Galveston, TX), Blaffer Art Museum (Houston, TX) and Lage Egal (Berlin, Germany). Her work has been included in numerous group exhibitions including Moments in the System at THE MISSION (Houston, TX), The Ambassadors at Cris Worley Fine Arts (Dallas, TX), Linear Imaginations at Sicardi Gallery (Houston, TX), Mass Media, Mixed Media at Cuchifritos Gallery & Project Space (New York) and Wildernesses at The Logan Center (Chicago, IL). Structural Adjustment is Johnson’s first solo exhibition at THE MISSION.