What You Get and What You See 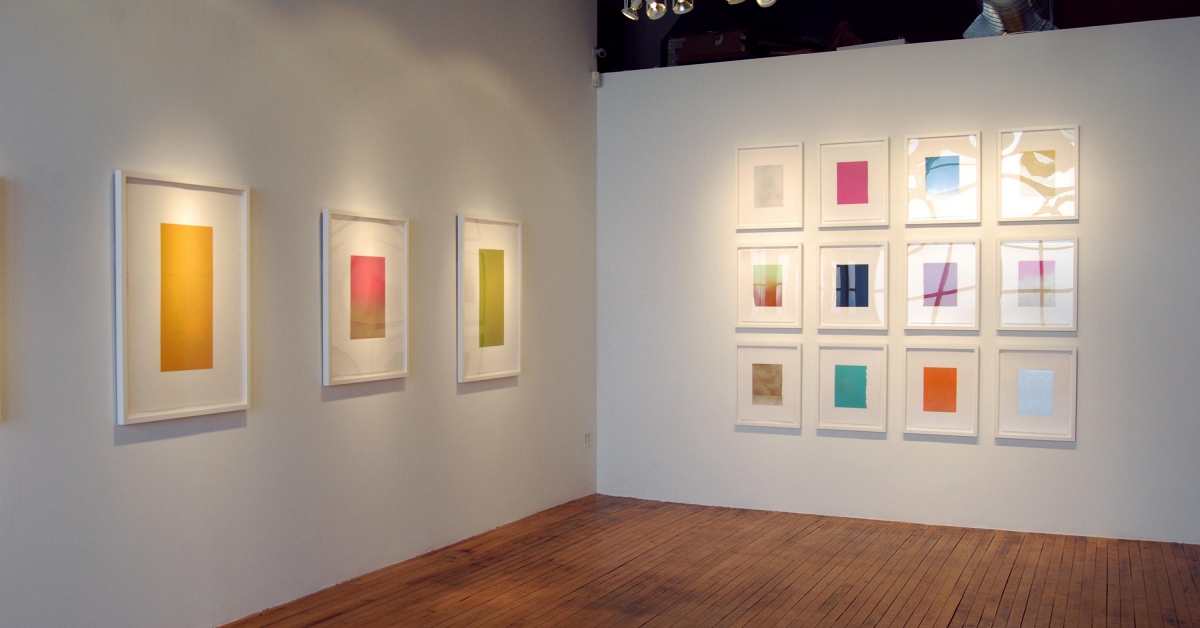 The word sfumato, from the Latin (via Italian), fumare (“to smoke”), is a painting technique used to eliminate harsh outlines in painting that might appear in, say, a coloring book. Through miniscule brushstrokes, areas of color are blended into one another, making for a hazy, more realistic depiction of light and color. An early, textbook example of sfumato is Leonardo de Vinci’s Mona Lisa. Another, unabashedly contemporary and far less realistic use of the device appears in Lisa Yuskavage’s luscious, soft core paintings of women emerging from fogs of glowing, saturated color. Yuskavage has called these works examples of “kinky sfumatos”—a definition that also fits Adam Gondek’s new, iridescent works on paper to a tee.
By applying layers of varied materials like acrylic, enamel, lacquer, and combinations of these elements, onto images of pin-ups from old-time girlie magazines, this young Chicago artist arrives at powerfully discrete pictures that teeter on the edge of the wrong-headed and the obsolete. After all, these works invoke both 21st century painterly abstraction and print pornography. Featuring luscious grounds of pinks, purples, pale greens and silver tones that almost totally obscure his figures, Gondek approaches an older technology for reproducing erotic images with the passion of a color fetishist. His combination of Mark Rothko shimmers and Bob Ross sunsets envelop the outlines of his pin-ups like Pantone saunas. If the ironies contained therein are, as it were, partly ready-made, so are the significant pleasures to be extracted from entering Gondek’s rectangles of eroticized chroma.
Titled simply after their predominant color combinations—Mustard Green Nude or Silver Pink Nude, for example—Gondek’s diaphanous dames adopt the artist’s own apparent nonchalance towards his putative subject matter. Despite their presence as color fields, these are also reproductions of the sexualized female body, a fact that doesn’t seem to exercise their creator much. “I’m interested in what is not there as much as what is there,” the unseen and the seen,” Gondek has said by way of making explicit his purposefully ambiguous approach. Meditations on the dissonance involved in taking loaded subject matter and making it nearly disappear in a field of steamy color, Gondek’s ladies appear less like enticing sexpots engineered for the male gaze than ghostly, teasing but ultimately shapeless apparitions intended to subvert objectification itself.
Like Bernini’s Daphne, Gondek’s gals are rendered in mid-transition: rather than morphing into a tree trunk or branches when caught by Apollo, God of art, this artist’s appropriated subjects escape the realm of rounded line and shape and turn, instead, into mists of numinous color. Yet Gondek’s pictures also share something of the intensely ideational effect of Robert Rauschenberg’s Erased de Kooning Drawing (1953). Paintings that are arrived at through a process of near obliteration through color, Gondek’s pinups take an original image and wholly transform its clumsy erotic essence. Rather than simply invite us to see a fantasy version of the female body, Gondek proposes that we experience and conceptualize its hazy disappearance. We see far more, the artist suggests, by learning a new way of seeing.