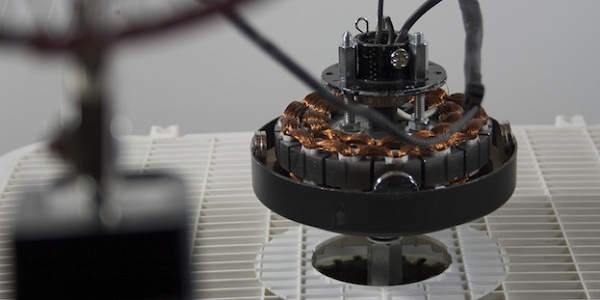 THE SUB-MISSION is pleased to present Wilderness and Household, a collaborative project by Michael and Yhelena Hall. Merging two parts of contemporary Western culture -– domestic routine and industrialization -– Michael and Yhelena Hall employ concrete, consumer goods, and reinterpreted everyday home technologies in their site-specific installation. An opening reception will be held Friday, July 10, from 6 to 8pm. The show continues through Saturday, August 22.

Michael and Yhelena Hall embrace material associations in Wilderness and Household. The exhibition features a wall-mounted triptych of cast concrete collage that incorporates packaging from easily accessible consumer products and polished rebar, which is revealed in deteriorated areas of the concrete slabs. Extending their installation into the Chicago urban terrain, Michael and Yhelena Hall produce a concrete collage designed to level breaks and voids in a well-worn overpass at the corner of Ashland Avenue and Arbor Place. The concrete collage is installed directly within the infrastructure and photographs of this off-site installation are accompanied by two small, wall-mounted concrete collages cast from the same location. The final element of the installation features a box fan that propels air through a second box fan that is repurposed into a wind turbine to generate electricity to power a third, smaller oscillating fan.

Concrete works with packaging from over-consumed products paired with mundane, mass-produced objects reconstructed to generate green energy highlight the cause and effect – and ultimate discourse – of sustainable development in today’s society.

Michael Hall received his MFA from the School of the Art Institute of Chicago (SAIC) and received his BFA from State University of New York (SUNY) at New Paltz. He has recently exhibited at ROMAN SUSAN, Terrain Exhibitions, and Defibrillator Gallery in Chicago. He has also exhibited at NURTUREart Gallery in Brooklyn, Current Space in Baltimore, and the New Orleans Film Festival.

Yhelena Hall received her MFA from State University of New York (SUNY) at New Paltz and received her BFA from Kharkiv State Art School in Ukraine. She has recently completed residencies at ACRE (Artists’ Cooperative Residency and Exhibitions) and Wormfarm Institute in Wisconsin. Yhelena Hall’s work has been included in exhibitions at ROMAN SUSAN and Chicago Art Department. She exhibited at THE MISSION in PARALLELS // A Collaboration with ACRE Residency in 2013.