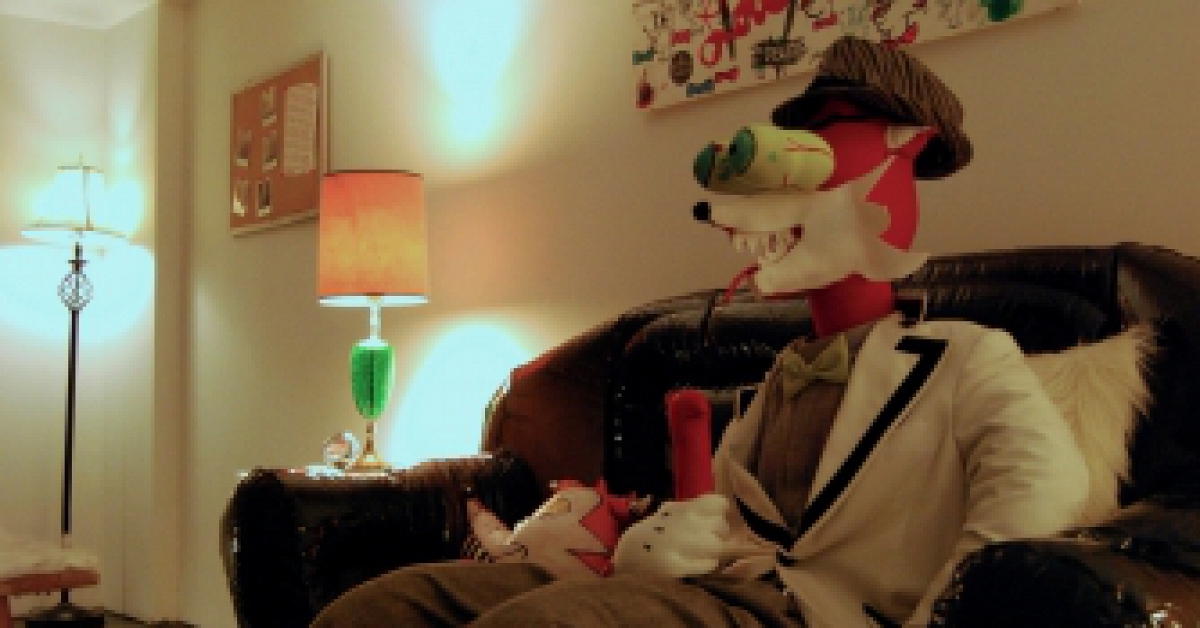 Foxx is a character I originally created as band artwork that I wound up getting completely obsessed with. He is based off of Tex Avery’s wolf character which made his first appearance in animated shorts such as “Dumb Hounded,” in 1943. The object of Foxx’s desire is the curvy, salacious, pin up-esque, will make steam blow out of your ears “Red Hot Riding Hood.” Her character appears in Avery’s cult classic cartoon by the same name. When I started making the work for this series I thought the Foxx character symbolized men. To a certain degree I think he does. He is greedy, aggressive, horny, totally perverted and tirelessly hungry for the object of his desire. Then I realized the Foxx was me.

All of us, as human beings have to keep certain thoughts, behaviors and urges at bay. We do this every day in order to co-exist with our fellow humans and contribute as functioning members of society. I am able to express those hidden parts of myself in my artwork. All the dirty, indulgent fantasies I entertain in my head can be spilled out on to the canvas. The Foxx’s narrative is a simple one. He does not have that editing process that most of us do. He takes what he wants, he pursues what he lusts for and he loves to misbehave.

For my SUB-MISSION show, “Foxx Luv” I have made an installation of Foxx’s living room. In an ode to one of the masters of Cartoons and one of my biggest influences I have flooded the room with sexy images of Red. Avery laid down a foundation of innovation that would revolutionize cartoons for generations to come. Making this installation is my way of paying respect to his legacy. By creating Foxx’s living space I am attempting to make a cartoon into a reality. The room is filled with soft sculpture, the soft fuzzy textures and bulging pillow shapes emphasize the character’s transition into the 3rd dimension. Foxx sits on his couch watching Red dance on the television screen, mesmerized in erotic bliss.

What Avery was so good at was making his characters human. Fox and Red are the perfect symbol of human sexuality. Their world is filled with lust, desire and obsession. Avery’s constant over exaggeration of facial expressions and bodily movements reflects the heightened drama we can often feel in our real life romantic relationships. It seems most of our fantasies are rooted in some kind of reality.